I wonder if there is a way to trace fund flows in the Bitcoin network using transaction data. I’m using Google BigQuery public data and their Bitcoin transaction dataset has following columns: 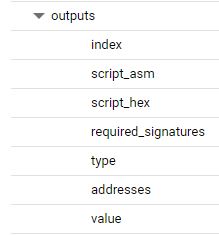 If that’s not possible, can I at least assume the connections/fund flows among addresses based on the following logic?

bitcoin core – Add ipv6 addresses from `getpeerinfo` of Node 1 in ...